Rosemary gives an account of a ladies’ outing in beautiful weather. Victoria, Jules, Heather and Vera made up the adventurous crew.

“Five intrepid ladies were under instruction to row to the Point for a swim – it was a hot day. Our captain was thwarted as we made it to Pinchen’s Creek where two rowers became swimmers. As they greeted a passing skiff the non-swimmers became hysterical to see how deep the water was, it nearly reached the swimmers’ knees and they were some yards out. Not content with that ‘swim’ four headed over the land to the real sea for a swim leaving one rower boat minding and photographing. Most enjoyable without being taxing.” 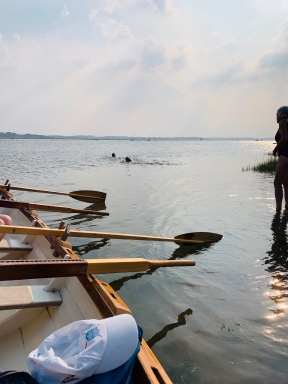